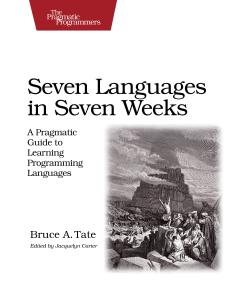 by Bruce A. Tate

You should learn a programming language every year, as recommended by The Pragmatic Programmer. But if one per year is good, how about Seven Languages in Seven Weeks? In this book you’ll get a hands-on tour of Clojure, Haskell, Io, Prolog, Scala, Erlang, and Ruby. Whether or not your favorite language is on that list, you’ll broaden your perspective of programming by examining these languages side-by-side. You’ll learn something new from each, and best of all, you’ll learn how to learn a language quickly.

Just as each new spoken language can make you smarter and increase your options, each programming language increases your mental tool kit, adding new abstractions you can throw at each new problem. Knowledge is power. The Seven in Seven series builds on that power across many different dimensions. Each chapter in each book walks you through some nontrivial problem with each language, or database, or web server. These books take commitment to read, but their impact can be profound.

Ruby, Io, Prolog, Scala, Erlang, Clojure, Haskell. With Seven Languages in Seven Weeks, by Bruce A. Tate, you’ll go beyond the syntax—and beyond the 20-minute tutorial you’ll find someplace online. This book has an audacious goal: to present a meaningful exploration of seven languages within a single book. Seven Languages hits what’s essential and unique about each language and will help teach you how to grok new languages.

For each language, you’ll solve a nontrivial problem, using techniques that show off the language’s most important features. You’ll discover the strengths and weaknesses of each language while dissecting the process of learning languages quickly—for example, finding the typing and programming models, decision structures, and how you interact with them.

Among this group of seven, you’ll explore the most critical programming models of our time. Learn the dynamic typing that makes Ruby, Python, and Perl so flexible and compelling. Understand the underlying prototype system that’s at the heart of JavaScript. See how pattern matching in Prolog shaped the development of Scala and Erlang. Discover how pure functional programming in Haskell is different from the Lisp family of languages, including Clojure.

Explore the concurrency techniques that are quickly becoming the backbone of a new generation of Internet applications. Find out how to use Erlang’s let-it-crash philosophy for building fault-tolerant systems. Understand the actor model that drives concurrency design in Io and Scala. Learn how Clojure uses versioning to solve some of the most difficult concurrency problems.

It’s all here, all in one place. Use the concepts from one language to find creative solutions in another—or discover a language that may become one of your favorites.

Bruce Tate runs RapidRed, an Austin, TX-based practice that consults on lightweight development in Ruby. Previously he worked at IBM in roles ranging from a database systems programmer to Java consultant. He left IBM to work for several startups in roles ranging from Client Solutions Director to CTO. He speaks internationally and is the author of more than ten books, including From Java to Ruby, Deploying Rails Applications, the best-selling Bitter series, Beyond Java, and the Jolt-winning Better, Faster, Lighter Java.