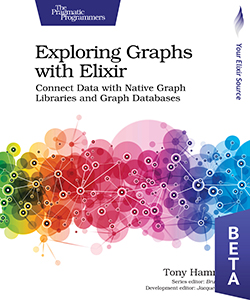 Data is everywhere—it’s just not very well connected, which makes it super hard to relate dataset to dataset. Using graphs as the underlying glue, you can readily join data together and create navigation paths across diverse sets of data. Add Elixir, with its awesome power of concurrency, and you’ll soon be mastering data networks. Learn how different graph models can be accessed and used from within Elixir and how you can build a robust semantics overlay on top of graph data structures. We’ll start from the basics and examine the main graph paradigms. Get ready to embrace the world of connected data!

This book is in Beta, final version expected Oct 2022

Beta Books: What do I get?

Graphs provide an intuitive and highly flexible means for organizing and querying huge amounts of loosely coupled data items. These data networks, or graphs in math speak, are typically stored and queried using graph databases. Elixir, with its noted support for fault tolerance and concurrency, stands out as a language eminently suited to processing sparsely connected and distributed datasets.

Using Elixir and graph-aware packages in the Elixir ecosystem, you’ll easily be able to fit your data to graphs and networks, and gain new information insights. Build a testbed app for comparing native graph data with external graph databases. Develop a set of applications under a single umbrella app to drill down into graph structures. Build graph models in Elixir, and query graph databases of various stripes—using Cypher and Gremlin with property graphs and SPARQL with RDF graphs. Transform data from one graph modeling regime to another. Understand why property graphs are especially good at graph traversal
problems, while RDF graphs shine at integrating different semantic models and can scale up to web proportions.

Harness the outstanding power of concurrent processing in Elixir to work with distributed graph datasets and manage data at scale.

To follow along with the book, you should have Elixir 1.10+ installed. The book will guide you through setting up an umbrella application for a graph testbed using a variety of graph databases for which Java SDK 8+ is generally required. Instructions for installing the graph databases are given in an appendix.

Note: Contents and extracts of beta books will change as the book is developed.

Tony Hammond is a longtime data professional with a wide experience of linked data architecture, public identifier management, and knowledge representation and engineering. He has worked on both sides of the information supply chain, from international research centers to leading academic publishers, and more recently is employed in the financial sector. He is especially interested in using graph databases and ontologies to build out integrated systems over distributed datasets.

This book is in Beta, final version expected Oct 2022

Beta Books: What do I get?